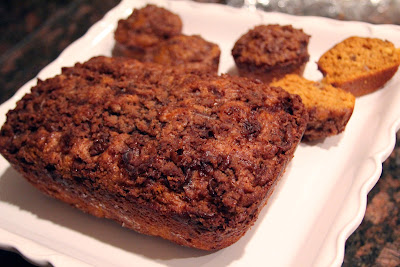 Though I don't make them very often - simply because I don't have the willpower to refrain from eating an entire loaf by myself - I really, really love a good sweet, dense, quick bread. In my mind, it's one of those foods that is totally acceptable at the breakfast table even though it probably should be classified as a dessert...along with cinnamon rolls and donuts. What's not to love about that? Banana...zucchini...apple...chocolate - they're all winners in my book. But this time of year, the clear winner has to be pumpkin. 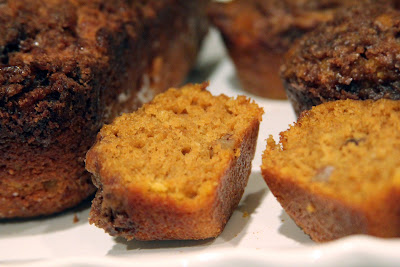 A couple of weeks ago, my dear friend Sally came to visit for a couple of days, which gave me the perfect excuse to make a sweet, Autumn treat for breakfast. Deciding on pumpkin bread and wanting to share some of it with my lovely coworkers as well, I decided to make half of the recipe into muffins instead of a second loaf like the recipe called for. With both forms turning out a-mazing, folks, I can confidently say that this recipe is going on my yearly "I.can't.wait.for.fall" baking list.

Of note, since I figured that the muffins had more surface area than the loaf, I increased the topping to 1.5 times the original recipe and used nearly all of it. If making 24 muffins, I would most likely double the topping. After all, isn't that everyone's favorite part, anyway?

Pumpkin Bread
Yield: 2 loaves or 1 loaf and 12 muffins or 24 muffins

For the topping:
Using fingers, mix all ingredients together in a bowl until well combined and topping resembles wet sand. Set aside.

Whisk together the flour, baking powder, and baking soda together in a bowl. Set aside.

In a large saucepan set over medium heat, combine the pumpkin puree, salt, cinnamon, nutmeg, and cloves. Cook the mixture, stirring constantly, until reduced to 1 1/2 cups, about 6-8 minutes. Remove the pot from the heat. Stir in the granulated sugar, brown sugar, oil, and cream cheese until combined. Let the mixture stand for 5 minutes then whisk until no visible signs of cream cheese remain and mixture is homogenous.

Scrape the batter into the prepared pans. Sprinkle the topping evenly over the top of each loaf. Bake until a skewer inserted into the center of the loaf comes out clean, 40-50 minutes (20-25 minutes for muffins). Let breads cool in pan on wire rack for 20 minutes. Remove breads from pans and let cool for at least 1 1/2 hours. Serve warm or at room temperature.